In the US and throughout the world, ever increasing demand for good quality, high purity water has led to strict regulations covering everything from disinfection by-products created by the addition of chlorine, to metals such as lead and copper that can leach into the water supply from corroding distribution system piping. There are now regulations in the US that extend to even cover the aesthetic properties of drinking water such as color, and taste & odor.

Although Chlorine Dioxide has been in use to treat municipal drinking water for decades, these ever tightening guidelines have led more and more municipalities to turn to chlorine dioxide due to its many unique features as an oxidizer and disinfectant. In some cases, chlorine dioxide is the only viable technology that is practically able to help municipal drinking water plants meet current EPA guidelines. As human, agricultural, and industrial demand continues to grow and stress existing water supplies, the need for innovative water treatment solutions will certainly also continue to grow.

While there are a variety of methods commercially available to generate chlorine dioxide, not all generation methods are alike. The generation method used for treating water that is meant for human consumption, is extremely important.  Consideration should be given to different methods depending upon the volume of water being treated, raw water quality, application, and existing infrastructure.  In the majority of cases, Water Solutions recommends Nalco’s Purate® based process and SVP-Pure family of chlorine dioxide generators for treating municipal drinking water.

What’s different about Purate and the SVP-Pure generators?

Purate® is Nalco’s new, patented technology for the generation of chlorine dioxide. When used in conjunction with the SVP-PURE® (Single Vessel Process) generator, Purate® provides a safe and reliable method for producing a chlorine free source of chlorine dioxide. The Purate® system is based on the following patented chemical process:

Here are just some of the many unique features of chlorine dioxide:

Chlorine dioxide is widely used for odor control and will quickly and safely oxidize many compounds for taste and odor control such as phenols. When chlorine reacts with phenols, it forms chlorophenols, which have a worse taste and odor profile than phenols. When chlorine dioxide is used to destroy phenols, no chlorophenols are produced.

As North America’s largest and most innovative supplier of chlorine dioxide systems, let Water Solutions unparalleled experience, water treatment know how, and expert technical support help your facility realize the many benefits chlorine dioxide has to offer. Contact us today to arrange to meet with one of our application engineers. 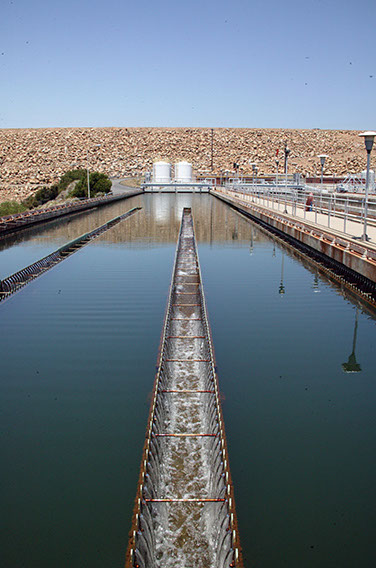 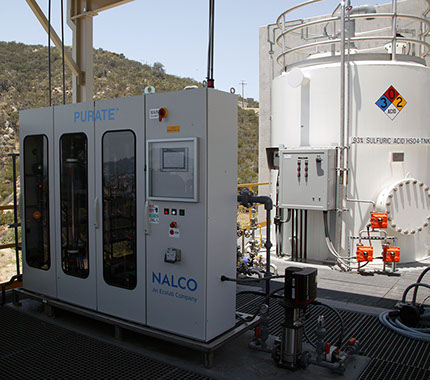 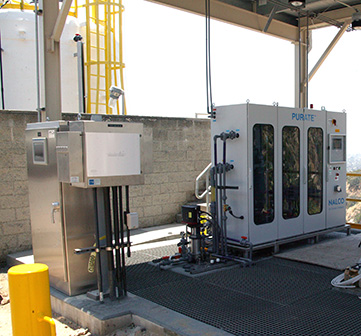 There are two precursors required to generate chlorine dioxide via the above reaction, Purate®, Nalco’s trade name for its sodium chlorate/hydrogen peroxide blend, and 78% (by weight) sulfuric acid. Since this reaction neither requires nor produces chlorine (gas or liquid), it is the only truly chlorine-free process for generating large quantities of chlorine dioxide. Using Nalco’s SVP-PURE® generator, this process produces a safe concentration of ClO2 in an aqueous solution that is suitable for a wide variety of applications.

Other production methods produce chlorine dioxide using sodium chlorite and chlorine gas, or sodium chlorite and hydrochloric acid, or sodium chlorite, acid, and bleach. Since chlorite ClO2 generators are configured to intentionally overfeed chlorine and/or acid, to insure complete conversion of sodium chlorite to ClO2, you may end up with a witches brew of chlorine dioxide, unreacted acid, and unreacted chlorine rather than pure ClO2. This excess chlorine can then react with naturally occurring organics in the raw water, creating undesirable disinfection by products. Furthermore, since water treated with ClO2 must be tested for chlorite in the finished water, with an MCL of 1.0 ppm, should any sodium chlorite not fully react in the generation process, it will add to chlorite residuals in the finished water possibly leading to an exceedance of the 1.0 ppm MCL for chlorite.

With the Purate process, Purate and 78% sulfuric acid are reacted in undiluted form in the base of the reaction column producing pure ClO2 gas, oxygen, and a small amount of sodium sulfate. It is impossible for either unreacted chlorite or unreacted chlorine to enter the treated water from ClO2 addition. Lastly but not least, chlorine dioxide generated using the Purate method is typically 25% to 30% less expensive on a per pound produced basis than chlorine dioxide produced using sodium chlorite.